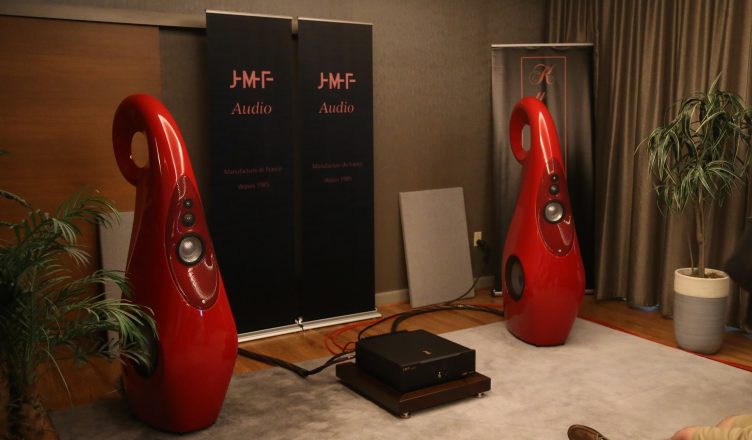 Last weekend we attended AXPONA or Audio Expo North America for those who may not know. This is the first time it has been held since the beginning of the Pandemic. Not only were we very excited to be able to go, the exhibitors, and attendees alike were thrilled to be able to attend. AXPONA is currently America’s largest Hifi show, boasting floor after floor, room after room of the world’s biggest and smallest names. AXPONA has everything from one-person operations to corporate giants, and everything in between. While typically companies bring their Flagship models to show off what they are capable of creating, others also bring entry-level and mid-tier to showcase a range of products. While I will not be covering every single room, I will go over some of my favorites, and some that I think were the most impressive, or perhaps the least likely to be as well covered.

The AGD room threw me for a loop, I didn’t realize that the “tubes” in their amps were actually discrete Class D amplifiers. I just never really looked into it, I have seen photos of the amps and thought oh tubes okay. No, inside each of those KT88-shaped bottles is a MOSFET amplifier. The amps I listened to were the Audion Mono Blocks and the Grand Vivace, playing from the Andante Preamp putting out 170 watts and 400 watts each, respectfully. Class D has come a long way since it first came to market, now offering clean, cool power in a package that Class A and A/B can not compete with. Does it sound as good? That is hard to say as I have not put two otherwise equal amps up against each other, however, AGD’s amps have convinced me, and probably many others that it is a very viable option and one I could be happy with in my personal system.

This was another first for me, I have never heard Aventgarde’s horns before. DCS and VAC are both manufacturers I have heard of in other systems and did not disappoint with the giant Trio XD Horns. between the horns were 2 of their massive bass horn units. The combination brought clarity and detail I think may only be possible with horns. This is horns done to the upper echelon, not just a horn-loaded tweeter in a cabinet. It is hard to describe the sound, it’s very present, demanding your attention. I feel as though horn speakers are like electrostatic or magneplaner, in that they offer something you just can not get from traditional drivers, for better or worse, as they are not everyone’s cup of tea. They are forward, can be bright, and for some a bit to aggressive. Though they are fast, detailed, and clear as glass.

To continue with unconventional speakers Bayz Audios Speakers are an omnidirectional design, creating a 360-degree circle of music. At the show, they were powered by a massive Pilium Archilles amp as well as a Preamp from Pilium. The sound did not seem to come from the speakers themselves but from the room. Listening offered a very cool sensation of almost sitting in the sound stage, not so much in front of it. As for tonality, the speakers sounded pretty neutral, the bass was tight and impactful, the midrange was lush, and the top end was not too bright. Beyond the great sound, the speakers are lookers as well. The Pilium electronics provided plenty of clean power to really get the most out of the speakers.

We can not talk about the unconventional approach to audio without talking about Cabasse and the Pearl Pelegrina. This is an all in one Hifi system. In the base of the speakers, are the amplifiers, DACs, and Preamp stage. These are 4-way speakers, each driver having its own Class D amp. the front houses a 3-way coaxial driver covering the bass to treble with a subwoofer in the back for the sub-bass. The Pearls offered great detail, though they have quite the attack. The Class D amps drive the speakers to create a massive sound for their size, and as mentioned earlier, not at the cost of quality. Class D is becoming more and more common in Hifi now, and with the quality, companies are getting from it, I think it is here to stay. All in this system is under $30,000, and you don’t need anything else to listen to music, though you can plug in a Turntable, CD player, or many other sources if Bluetooth is not your thing. Latency was low and with modern Bluetooth being capable of High Res files there is little reason to shy away these days.

Among the most audibly and visually impressive rooms is the Credo Audio room, powered by Emm Labs with a VPI Avenger turntable with a second arm sporting a DS Audio optical cartridge. This is the first time I have seen one in person, using light to transmit the vibrations from the stylus to the phono stage. The Credo Cinema LTM are impressive Line Arrays, putting out room-filling rich sound, getting power from Emm Labs Monoblocks and Electronics. Line arrays are probably my favorite type of conventional driver speakers, if you have the room in your house as well as your bank account they are worth a try.

Focal had an impressive room, with Utopias, Kantas, Headphones as well as IsoAcoustics displaying their Isolation feet. I was very interested in the Kanta powered by Nagra display. They are perfectly sized, and reasonably priced high-end towers. They have powerful bass, and a very full midrange, the tweeters offer great coverage of the high frequencies. They may lean a little to the warm sound of neutral and think these may be one of the better dual-use high-end floor standers. The Kanta would perform as well in a theater as it would in a two-channel system.

Elac put together a great room using their Concerto S 507 and Alchemy DPA – 2 amps running in mono fronted by the DDP-2 Preamp. The power amps are another example of well-done Class D topology. The Concerto speakers are well balanced and maybe one of the few smaller cabinet speakers that do not need a powered subwoofer. It helps when you have up to 625 watts per channel when running the amps in mono. I have reached out to Elac to get these in for review, I would love to go in-depth with the Concerto speakers.

We had a great time at AXPONA 2022, and look forward to returning in the future. We highly recommend making the trip, especially if you have not been there before. If you did miss AXPONA, there are still a few shows this year and we plan on attending at least one more this year. Below we have the rest of the photos we took, unfortunately, I can not give details for every single room, but if you have questions I will do my best to answer them.