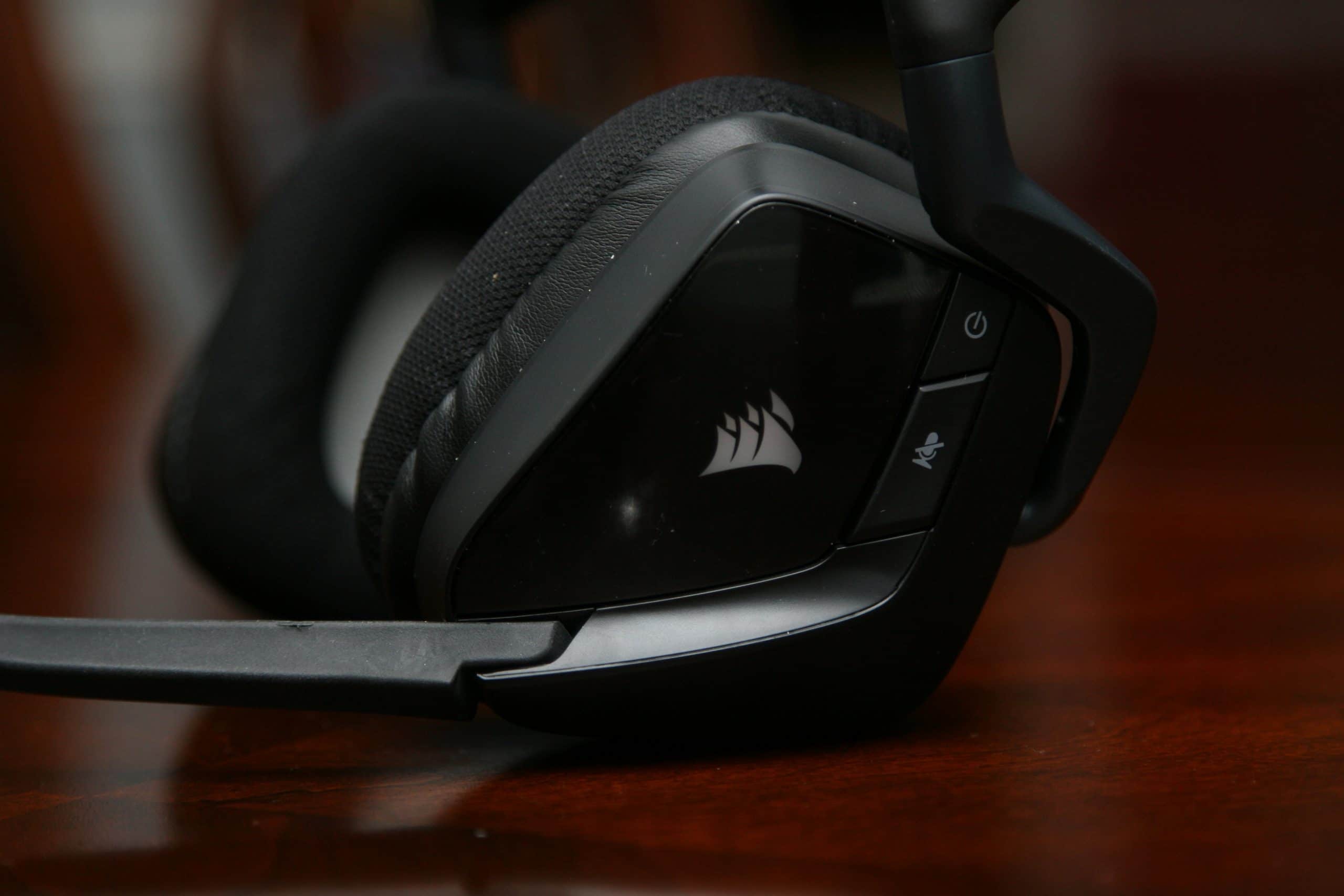 A genre of audio we have not got into yet at Hifi Chicken is gaming. This is not because we don’t think that gaming and hifi go together, but rather that we are not huge gamers. I own two consoles, a Nintendo 64 I got new for Christmas back when it can out and a Switch, neither of which are awarded for high fidelity sound. Roger, however occasionally plays some online games so I decided to try out PC gaming as well. If you are going to get into online gaming you need a head set. I decided to go with the Corsair Void Pro. For around a hundred bucks, what could go wrong?

The Void Pro is a PC only 7.1 channel head set. It uses a wireless USB adapter to send the audio to the headset and has a USB cord as well for charging the internal battery. The Void Pro’s have three buttons on them, one is a volume wheel, another for turning the mic on and off and a power switch. To be honest though they could have skipped out on the mic button, when you swing the mic up it automatically turns off. One of my favorite features though, is that the mic can be used to cancel noise or inject outside noise into the audio signal. I particularly like to have the mic bring in the surrounding audio, largely due to the fact that there is a green chicken on my chair anytime I am at the computer. This gives me the ability to hear him as well as anything else while still enjoying the game audio as well.

The build quality was probably the best out of the ones I looked at in my price range. They are light yet sturdy. The pieces that hold the cans to the head band are made of metal and the head band itself adjusts firmly. The cans are plastic, as well as the headband cover with metal making the core of the headband. The mic is nice and flexible while still holding where you put it very well.

When it comes to headphones there are two major concerns, sound and feel. Many of us wear headphones for many hours a day, be it gaming, commuting, or at the office. They have to be comfortable, no ifs ands or buts. To me it is actually more important than sound quality, as someone who gets migraines, uncomfortable headphones are a no go. Sound is irrelevant if you don’t actually like to have them on your head right? The Void Pro is very comfortable on my head shape (neutral-oval). They are rather light for a wireless gaming set, and the ear pads are pretty nice. The head band padding is quite soft as well. I tried on probably a dozen and these seemed to fit me best. Always make sure to try before you buy with any audio, but especially with audio you wear.

In terms of sound, they quite warm. They lean to the mid and bass more than I usually like for music, however for games it is perfect. Mid range is the most common for speaking vocals so it makes sense. As well you want to capture the boom of explosions in games. They have a similar signature to what you would set up for cinema. The mic from what I am told while playing with others is clear as well which is obviously important. Though it is harder test as it depends on their sets as well. The detail is incredible for a set of headphones in this price range. The surround sound is, well, interesting. I think for a two driver set up it does pretty well at imaging where sound is coming from in the game world. That is not to say it couldn’t be better, then again they could cost a lot more as well. Over all I think it simulates surround sound well enough for the fast pace of FPS, to where it is not inhibiting you. Though on slower paced games like RPG it can be a bit difficult to pin point where someone is unless they are pretty far left or right of you.

Headphone Battery Life: Up to 16 hours

If you are into PC gaming and want a head set that sounds great and won’t break the bank the Void Pro is a great option. Honestly for the money I spent on them I can not say there is anything I have an issue with. Sure the don’t sound how I prefer when it comes to music, but they weren’t designed with that as the primary objective. Another benefit to me is that all my peripherals are Corsair now, including my PC case and water cooling, so integration into the ecosystem was especially easy. Best Buy caries these in stock at most locations so you can make sure they are good fit for your noggin before buying a set.

Disclaimer:
This review was not paid for by any company, the product was bought at retail MSRP by me personally.