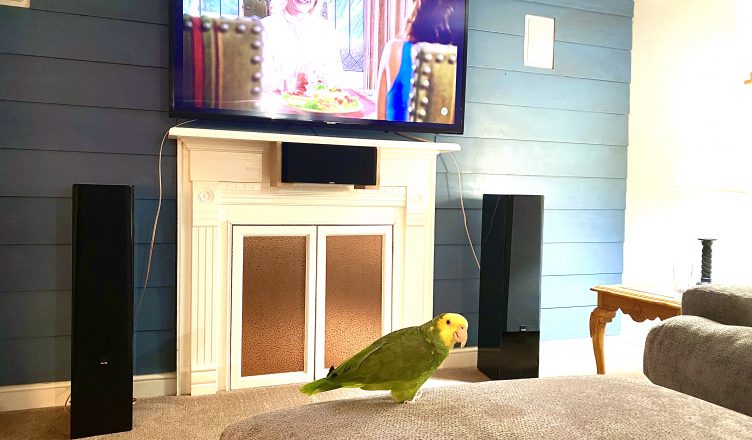 A little while back we received a pair of SVS Prime Towers for review, in the first part of the review we set them up in a 2 channel music only system. For part 2 we hooked them up to the Surround Sound system. The surround sound (or ss for the rest of the review) is made up of JBL in wall and in ceiling speakers, a Boston CRC Center Channel, Boston CR400 Subwoofer and an Onkyo integrated amplifier. Normally I have Boston CR7 for front left and right channels. We did not do any measurements with this setup as it is not totally fair due to other influences. Maybe we can work on doing a full SVS set up and get full picture for this. let’s get into the review.

I have to say first and foremost, I personally prefer the SVS Prime Tower in a home theater setup than a 2 channel music setup. I think they sonically lean more towards spoken voice and sound effects. We previously tested them in the 2 channel prior to this. They were run in or broke in for a while, whether or not you get on with breaking in a product we do it per the manufacturer as it won’t hurt and if it you are the type that does it you will know we have. Without messing at all with Onkyo’s settings they sounded very pleasing. First thing I watched was Batman Begins, one of my favorite test movies. There is a wide range of sound from voices, sound effects and music. The bass added to the front soundstage filled in where the sub’s crossover setting cuts off. I like to keep my subwoofers from reaching to high in the frequency range so the two woofers in each tower added to the total frequency range very nicely. If you recall the first part of the review I noticed the Prime Towers seamed to lean to the low and mid frequencies more, this really helps them blend into a theater setup well. Voices sound natural through the mid drivers, the highs come through well for theater use as well.

I also tried them out with my Nintendo Switch playing a variety of games and was very pleased with how they sounded with Legend of Zelda: Breath of the Wild. If you are a console gamer more than a movie watcher the Prime Tower would be a great option to consider. My Wife who spends more time in the SS room than I do also liked the Prime even for TV viewing. (maybe we convince her to get a permanent pair).

If I had to compare the tonality of the SVS Prime to something else I would say they remind me of Paradigm’s tone. That is not to say they sound like a pair of Paradigms, they both seem to me to have a warmer over all tone. I think that may be in part to who buys the speakers. I tend to see entry level Paradigms and SVS speakers in home theaters. I would make sense to me at least that this is where they both thrive and come to life in my opinion anyways. On the other side of the coin I would not enjoy my Martin Logans in the theater room, so certain models or brands have a tone that lends themselves to certain listening situations.

I played with the position as almost everyone will do, and should do with speakers. I was limited somewhat on the layout of the room and furniture. I had them up closer to the wall than I normally would like but was able to space the from the side walls pretty nicely and get good sound. At first I was worried about the ports in the rear being too close to the wall, however due to having a powered sub I was relying much less on the speakers for the bass. I did not toe them in much at all due in part to all the different seating positions in the room, as well as appearance.

Appearance is something some audiophiles with ignore in the pursuit of sonic perfection. It is something though I care about quite a bit. I have to live in my house, along with my wife. We want the rooms to look as nice as they sound. The SVS Prime Towers as I have mentioned before have a beautiful finish and profile. The fit nicely into the home theater room. They are not huge or bulky, though they are large enough to fill a medium to larger room with sound. I don’t think they would be optimal for a large dedicated theater room, for that I think you may want to check out the Ultra Towers if you are looking SVS. I do think it is hard to compete with the Prime Tower for an all in price of 1200 U.S.D. for the sound quality and appearance. Certainly there are better options, worse options and simply different options.

I can not outright say these are the best Tower for 1200 dollars, I can say though that it is a tough competition at this price point. Similarly priced towers would be Kef Q550, Klipsch Reference 8000f, and Polk Signature S60. Though the Klipsch is really hard to compare due to the distinct sound they have with a horn loaded tweeter. However if you are in the pricerance of 1100-1300 I recommend trying out the SVS Prime Tower as well as the others listed. Only you can determine the sound you like best. Personally I would take the Prime over the Klipsch due to personal preferences on both sound and look, at least in a SS setup.

Who is the SVS Prime Tower for?

I would say that the prime candidate, see what I did there, would be someone looking to build an all in one system. Not as in like everything works through a single box (think crosley). More so someone who may not have a dedicated music room and theater. Someone looking to get a speaker that can do well in a wide range of audio scenarios. I envision these in a family or living room on either side of a TV and maybe a turntable on the console as well as a DVD Player or game console. They come in at a respectable price point for what you get from them. I think their appearance allows them to sit nicely in any home without screaming look at me, while also not just blending into the wall. I am all about value, and at Hifi Chicken we try to showcase value in audio. I don’t think that means cheap, but simply is what you are paying for being delivered. The SVS Prime Towers have good value to me, shouldn’t be disappointed with them at all for what you spend, unless of course they are not the sound you are looking for. That last point is why we preach in every review to go and listen to as many options as you can before spending that hard earned money.

The SVS Prime Towers were supplied to Hifi Chicken from SVS for the purpose of review. SVS did not pay in full or part for review, nor are they a paid sponsor of Hifi Chicken. As always we try to be as objective as we can be with reviews to provide readers with quality information to make informed decisions.