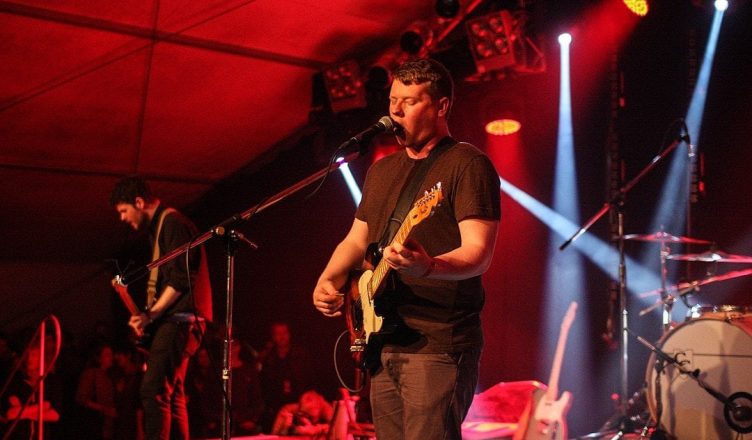 We reached out to a band I really enjoy to talk about their music. If you have not already listened to them, check out We Were Promised Jetpacks. They are a Scottish rock band, The band consists of Adam Thompson (vocals, guitar), Sean Smith (bass), and Darren Lackie (drums). They have a great sound unlike anything else I have heard. You can listen to them on Spotify, Soundcloud, and other platforms as well. They are also touring so you can check out show dates at the link below.

Sean’s answers are below.

Sean: Believe it or not our previous name was even worse. We spent ages compiling a list of band names when we were at university.  Our old guitarist Mike pulled We Were Promised Jetpacks from somewhere and we went with it.

Sean: Drummer Darren and I (Sean, Bass) met when we were 5 in primary school. Then we joined forces with Adam and Mike in high school. I think we played our first gig when we were about 15.

3.         If someone who has never heard your music asked, how would you best describe your sound?

Sean: Scottish Alternative Elmo. That should’ve said emo but autocorrect decided on Elmo and I like it.

Sean: When we were creating Sore Thumb Darren and Adam had a big argument about the structure of the song while wearing wigs. That was fun.

Sean: When we were recording the last record I was listening to a lot of the war on drugs, the national, future islands, Sharon van Etten. That kinda thing.

6.         Do any of the band members have formal musical training, or are you more self-taught?

Sean: Darren and I went to drum lessons at high school. He stuck with it. That’s why he’s on drums and I’m on the bass.

Sean: I like to try and go for a run in the mornings. Gets the endorphins pumping and clears your head. We also like to find a nice coffee shop wherever we go and chill there before soundcheck.

Sean: The hardest part is always getting the first batch of songs for an album together. Once you have a base and a certain vibe then the rest of the album generally comes along a bit easier.

Sean: At the moment I’m loving PUP. Their latest album Morbid Stuff is incredible and I went to see them in Glasgow recently and totally loved it.

10.       At what point in the band’s history would you say this all became a reality, to build on that, many kids dream of being musicians as a profession. When did it hit you that this is actually happening for you?

Sean: The first time we came to America and people actually came to see us was an eye opener. I don’t think our first album had quite come out yet and we couldn’t quite believe we were about to release a record and then tour it all over North America and Europe.

11.       If you could collaborate on a song or album with any other musician, past or present who would it be and why?

Sean: I’d like to play bass on Dr. Dre’s next album please

**Hifi Chicken note, if anyone knows how to contact Dr. Dre lets set this up.

12.       Touring seems as though it could get stressful, does it cause strain in your personal life?

Sean: it certainly does!

We are going to see the Band In Cleveland later this month and will bring back some awesome photos. Come rock out with us and We Were Promised Jetpacks.