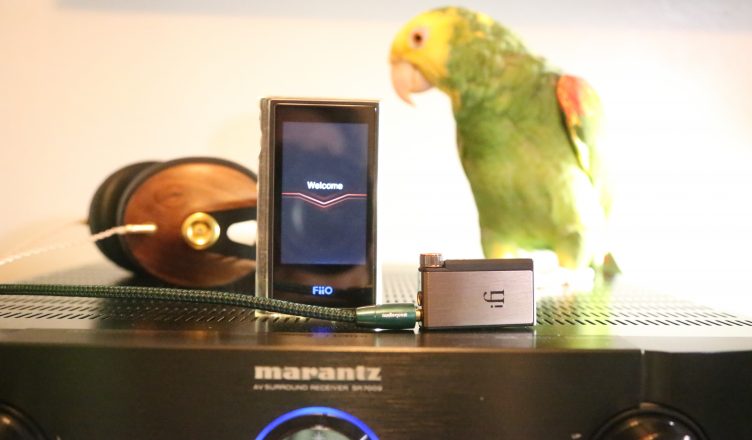 The latest to come in from iFi Audio was the Go Blu. The Go Blu is their smallest portable DAC/Amp yet, while still packing in features all for $199.99. It is fairly inexpensive, though not their cheapest portable option. What you get for the bit of extra money is the compact size and the latest in Bluetooth connectivity. Bluetooth is no longer the bain of convenient Hifi streaming, allowing lossless streaming without any cables. We tried out the Go Blu in a multitude of ways to see what all this tiny device had to offer.

Getting the Go Blu set up consists of two steps, charge it and pair it. That is literally it, maybe outside of trying the 3 different filter options, which are XBass, XSpace, and the two combined, you can also turn them all off. Personally while listening with the Meze 99 Classics, I preferred both on. Charging didn’t take long at all to get a full charge to start playing with the Go Blu, maybe 15 minutes, I suspect they ship somewhere around half charged to keep the lithium happy. Speaking of battery, let’s talk about battery life. In the month or so I listen to the Go Blu, I only had it die during a listening session once. That was after using it nearly all day in the office and then at home for a couple of hours. That said your mileage may vary, due to different impedances, loudness, filters, and so on you may get more or less out of a charge. To give you an idea of where you may find yourself the 99 Classics are 32Ω and I usually had the volume around 1/3 when using the 4.4mm output and both XBass and Xspace on. Using the Go Blu is very simple with 3 buttons, and a dial. The main button you will use is the center of the chronographic dial. This will play, pause, skip and rewind your music depending on the number of presses. The very tactile dial adjusts volume and the button below will set the filtering, which you can confirm with the color-coded LED on the top. Overall feel and finish is excellent. The shell has a nice surface that is easy to grip, the main button placement is very ergonomic as well. The included carry case is a nice added touch to keep your Go Blue protected from scrapes and scratches in your pockets.

I wanted to test a variety of factors for the Go Blu, such as comparison of it to using my iPhone or Fiio M9 directly into my headphones and stereo. I also tested the single-ended out vs. the balanced output. The main way I listened was by pairing with my iPhone 11 Pro and playing Spotify Premium on max sound quality settings as per usual. When com, pairing this set up with using the iPhone and its DAC/Dongle the sound was slightly better through the Go Blu. The thing you notice is that with the Go Blu, the dynamic range is better at a given volume, as well as richer bass. The highs seem to come through a touch more effortlessly as well. This makes sense as the Go Blu has a dedicated DAC and Amp Stage that provides more power and clarity over the Dongle DAC that comes with the iPhone. For this iPhone test, I used the unbalanced cable for the Meze 99 Classics for both devices to keep things equal.

When I compared the Fiio M9 and the Go Blu in a similar fashion, first pairing the Bluetooth, then listening straight out of the Fiio M9 there was almost no difference in sound quality. With this test, I could use the balanced cable as both the Fiio M9 and the Go blu have built-in balanced outputs. I listened only to FLAC files I put on the Fiio to see if there was any noticeable quality loss when paired to the Go Blu. I could not decern the difference between wired and wireless. I was very happy about this as we all want lossless but also the convenience of wireless streaming. With the Go Blu you can have that at home and on the go.

I also used the Go Blu at home on the full stereo using an unbalanced Audio Quest Evergreen mini to RCA cable into the SR7009. The SR7009 has built-in Bluetooth as well so I wanted to see if the Go Blu was an improvement over the integrated option. Even though the SR7009 has Bluetooth 2.1, it does support A2DP, so lossless is possible. I say possible and not supported because this is the bare minimum level of support, as in works, usually, albeit very slowly. Any change of volume, song, artist, or otherwise has a massive lag before the Marantz catches on. It is not quite as slow with Spotify but still not ideal. So while the audio quality itself is not really different, the convenience factor is. The Go Blue using version 5.1 is near-instant in response to changes at the source. The Go Blu is a nice device to have if you are using a bit older Preamp/Reciever or even an older one with no digital inputs.

Balanced vs. Unbalanced listening proved nuanced differences. What is an interesting and probably needed feature is that the balanced and unbalanced outputs can be used at the same time. So of course I plugged both in and then used one for the left and the other for the right channel of the 99 Classics. It was like real-time A/B testing as I could listen to both simultaneously. That said I could not volume match, balanced amps are literally twice the output of the same unbalanced amp. That also means twice the distortion, that said, you listen to lower volumes as you have more power at the same setting. The bass on the balanced side seemed a little tighter and deeper, while the highs had a slight tough of extra airiness, and the mids seemed very much the same.

What about downsides? Well, the most noticeable issue I had was range. I was not able to measure some of the distances where the Go Blu would lose connection due to walls as well as distance, but the average distance away I could get without any loss was around 30-40 feet in open space and probably around 20 if there was a wall. This made me start to think about the target market for such a device. If you are near your source and still need a wire to the headphones, why not just use your source? Herein lies what I think would make the Go Blu a real slamdunk, some type of clip and optional short cables to attach it to various popular headphone bands making them essentially wireless. That is not to say that as it comes that it is not pretty awesome, it offers better quality over many phone Dongle DACs, ever-present these days, and it has a built-in mic allowing you to turn even balanced headphones into a HeadSet. I actually did this a lot while in the office and the quality is very good, better than many inline mics that headphones come with. Even with the limited range I still preferred it over plugging into my iPhone. It also repairs on its own when back in range so it isn’t really a major issue, just something to be aware of depending on how you may want to use it. I think another great use is the gym where you don’t have to shove increasingly large phones in the pockets of workout gear, which may not even have them.

Mobile audio is a finicky thing. You have to balance cost, convenience, quality, and size as well as having a need or want for the product. Most people want to carry less with them every day so trying to market an additional daily carry item is not easy. I think iFi has done a pretty good job with making the Go Blu hit a lot of those aforementioned points. The main thing on iFi’s side is that we audiophiles often sacrifice convenience for sound quality. So carrying the tiny Go Blu in my pocket is not bothering me at all. I would personally purchase one and would be very happy with it for office and on-the-go use as well as at home. As much as I love the ritual of putting on a record, sometimes I just want to listen to a playlist of a bunch of different music and not have to flip a record. The Go Blu is small enough to fit in any pocket, even women’s so long as they are not those fake ones that only look like a pocket, as well as that tiny pocket on men’s jeans. The battery lasts longer than just about any wireless headphones I know about and offers you a Bluetooth or wired DAC for your phone/computer. This is not my favorite product so far from iFi Audio, which I think goes to the Diablo, but at around 5 times the cost it is not really comparable. The Go Blu is a great overall product and a major leap forward in making on-the-go hifi even smaller and more accessible to people. Perhaps with following generations, we may see even more features and better range.

For more information and finding dealers check out:
https://ifi-audio.com/products/go-blu/

Disclaimer:
iFi Audio Provided a Demo Go Blu for review, iFi nor affiliates paid in full or part for review.