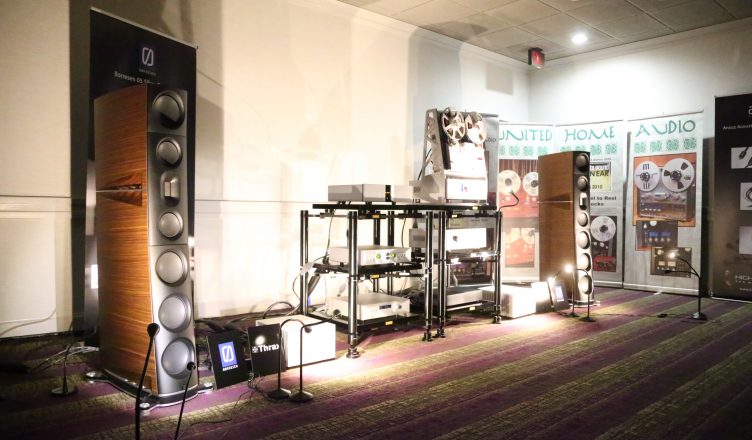 We attended the best show on the Eastcoast, Capital Audiofest, the show had many of the familiar brands and a few I had never heard of, including one that is brand new in the market. Capital Audiofest provided a great opportunity for us to see and hear a lot of products that are outside of our normal review prospects, speakers that would not fit in the listening room, and amps that cost as much as a car. The VAC (Valve Amplification Company) and Von Schweikert Audio room had north of 1,000,000 dollars in equipment in it, with the Ultra 11 Speakers making up around 300,000 dollars of that. Though there were other boutiques manufacturers that are in the more reasonable price range as well that we really enjoyed. 2 days worth of listening still wasn’t enough for us to fully take in everything the show had to offer, Capital Audiofest could probably be a week-long and still have stuff we didn’t experience. For the most part, we looked for rooms with products we had never experienced before or ones with new offerings that were not on the market yet such as the new B&W 801 D4 speakers.

The room we spend the most time in was the Montrose Room that had Perlisten S7t Speakers paired with 2 D215s subwoofers powered by AVM electronics and Audience cables throughout. The real highlight of this room for me was the sound stage and imaging created from the Perlisten speakers. The stage was wide enough I turned my head to point out sounds I was hearing as if each speaker had a ventriloquist in it. To really show this off we listened to Roger Water’s “The Ballad of Bill Hubbard”. The dog barking sounded like it was coming from outside the room.

Another great room was put together by High End by Oz. The speakers seen are Børresen 05, powered by a complement of Thrax and Vitus electronics. The combo created a riveting and engaging sound that pulled you in deeper as you listened. An overall neutral and balanced tone made for a very pleasant listening experience. Bass was tight and appropriate to the mids and highs. Speaking of the highs, they were clear and airy without being offensive or to in your face.

The mouse astonishing room had to be the VAC/Von Schweikert room. On Friday the large Ultra 11’s were being played, powered by 4 VAC Monoblock amplifiers. Preamplification and sources were made up by more VAC and Esoteric. This setup commands a room, the sound is as huge as the speakers. You are enveloped in the music, somehow listening to the music seems to become an interactive experience. Saturday the smaller yet still quite large relative to other speakers, Ultra 9’s were playing and still had a good performance. There is quite a difference in the sound between the 9 and 11. The difference is not in the overall tone, but more in the stage and presence of the music. The VAC room had north of 1,000,000 dollars in it, and it performed as such.

Tucked away a bit on the 3rd floor was one of the more interesting rooms we visited. Brand new to the market, Infigo was debuting their 250 Watt all Class A, the Method 3. Their Method 4 DAC also was the acting Preamp in this room, all powering a pair of Alta loudspeakers. And yes you read that right 250 watts of class A amplification. So those were heating the whole show right? No, they were not hot at all, and trust me I checked. We are talking with Infigo to find out more and possibly do a full review on the amps. We talked with the Infigo crew for a bit about the amp and their company and are very excited to see how they do in the Hifi world.

The departure from the status quo continued in the Audionec room. Below are a pair of their modular Evo speakers. No those are not rolls of paper towels, those are the mid-range drivers if we can call them drivers. Below are the woofers and above the tubes is the tweeter. The shape of the mid-range driver creates a seemingly 360-degree dispersion of sound. I walked behind the speakers and the mids sound the same as from the front. As many of us know, the majority of music lives in the mid-range frequencies so this is a very cool approach. It would be interesting to see a speaker that could take advantage of the design for the woofers and the tweeter. Tonality seemed to be on the warmer side of neutral, though that makes sense with the Tubes in the Lampizator, VAC, and Linear Tube Audio electronics seen below.

On the topic of nonconventional speakers, the Treehaus Labs speakers are made from slabs of live edge wood using Field Coil Speakers, which for most are long past their prime. It should also be mentioned they are open baffles, which will lend to their sound. These were powered by their in-house custom amplifiers. They sounded like nothing else at the show, better or worse, they really are something that will require a certain taste in reproduction. You certainly need a large space for these as well as they take up a reasonable amount of floor real estate. Treehaus should be on your bucket list to listen to.

Wells Audio is the quintessential boutique builder, we spend a little time talking to Jeff Wells and are working on putting together an interview and reviews. These are all built by Jeff with the help of one other person and the performance was exquisite. TAD speakers are excellent, to begin with, but when driven by excellent equipment you get an awe-inspiring experience. Beyond the pure capabilities of the Wells equipment, it is all very easy on the eyes. the porthole esque meter is a really nice touch.

VPI put on two excellent rooms this one with All T+A electronics and a Pair of their tables playing through JBL Everests. The table playing at the time of this photo was the Anniversary table on the right. The room was full of energy, sound permeated every ounce of your being. It was like being in a much larger music hall.

The second room, though many had VPI tables, put on by VPI had their Avenger table and Audio Research electronics. The speakers (not pictured) were Arion Audio, Apollo’s The combination of gear created a precision in sound that was memorized. The detail was enveloping and captivating. The room was incredibly neutral sounding.

Joe from House of Stereo in Florida put together a wonderful high-end room using top-of-the-line TAD Speakers, T+A amplifiers, and Synergistic Research cabling, and other equipment, as well as an Avenger from VPI. Also present was a Wolf Media Server as a source. House of Stereo did an excellent job setting up an extremely cohesive system. All of the components complemented each other very well.

The SRX is the latest in the high end from SR, I really like the built-in riser/cable separator disks.

In the headphone area, there were plenty of offerings to try out. Due to the number of people checking out various options I was not able to try everything out, however, I spent some time at the Audeze table, where they had a selection of amps to try out their headphones on, such as the Chord Hugo with Hugo M Scaler. I tried the CRBN Electrostatics as well as the LCD 5. The CRBN’s were my personal preference. They had a huge sound stage, clarity, and dynamic range that can be hard to achieve with headphones. I will say what people say about the LCD is somewhat true, they are heavy and would be hard to wear all day. The CRBN set also had better ergonomics for me at least.

I also checked out some of the tube amps from xDuoo, those I listened to through the classic HD600 from Sennheiser.

We had a great time at Capital Audio Fest and look forward to going back in the years to come. Gary, Qobuz, and the dealers as well as Hilton Staff put on an excellent show. It is well worth the travel to go experience all of the offerings. These shows are hard to have right now with the regulations in place due to Covid, so for them to do it at all let alone as spectacularly as they did is awesome. Below is a gallery of other rooms we visited. If you want to know anything about those rooms that we did not talk about feel free to drop a note and we are going to do a part 2, to go over the rest.

Hifi Chicken is in no way associated with any brands shown, nor paid for coverage in part or full. Hifi Chicken paid general admission to CAF.