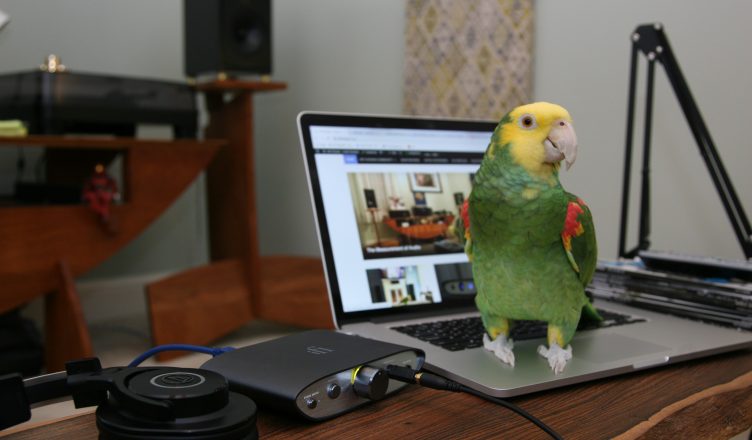 We have received the iFi zen Dac for review recently. This is a headphone amp and dac built into one unit. Headphones are in a lot ways many peoples’ first step into hifi audio. They are inexpensive comparatively, portable, small and do not require a dedicated space. The iFi Zen follows those footsteps in almost every way. It is small and inexpensive, however not entirely portable. If you Connect it to a laptop it can be powered via that but I am not sure a phone could power it, or at least not for very long. iFi does offer a few portable Dacs as well, so if that will be your main use you may want to take a look at their other offerings At a retail price of 129.00 U.S. dollars, it is quite tempting, yet concerning. Can you get good quality for 129 dollars, it’s either a deal or a gimmick right? Marketing has led us down a path in many industries that more money means more… better. Let’s get into the review and find out.

The iFi Zen Dac (we’ll call it the Zen from here on out) is definitely a deal. It sounds great when compared to anything’s built in DAC that I plugged it into. With the TruBass button on the front you get that beep hard hitting bass that your standard laptop will not provide through the headphone jack. Detail across the frequency range is increased as well. I listened to wide range of content changing between using the Zen and just the standard computer headphone jack. I just didn’t enjoy listening straight out of the computer, any time I was doing that side of the comparison I just wanted to connect to the Zen instead. As far as the amp goes, with my Audio Technica ATH-M40x I barely needed to turn up the volume knob, maybe 25%, to be at a comfortable listening volume so there is plenty of headroom for harder to drive headsets. I also tried out the Zen with the ATH-M50x which have a little larger driver and the bass sounded and felt like I have never heard from either pair. The nice thing is when I was watching youtube videos I could turn off the bass boost and have a more natural speaking tone to listen to. With music though it was almost always on, which I have to say I like having the fast option of just clicking a button when I choose. When I am at my desk on the computer I like to listen to EDM as it helps me work without being a distraction and EDM loves bass. The high frequencies are not missing either, one of my favorite test songs is “Robots in Motion” – Philter, this song has an incredible range of frequencies as well as left to right playback. The beginning of the song is almost impossible to make out on most headphones straight out of the computer but with the Zen it more akin to listening in my full listening room, you hear all the little nuances.

I worried that set up may be a bit of an issue, or at least something where you would have dive into menu after menu to get your computer to recognize and use the USB port audio. This was not at all the case, I plugged it in and my Mac immediately recognized and used it as the audio device. Windows 10 did as well on both the machines I tested it on, so setup is literally plug it in to a USB 2.0 or 3.0 supported computer and plug your headphones in and you are off to the races. You can also use the zen with powered speakers or a preamp as well, on the back just pic either fixed or variable to decide if you want to by pass the volume know depending on your use case. So ultimately set up is a breeze.

Who is the Zen Dac for?

I would say this is great for almost anyone with a computer and a pair of headphones. It improves sound quality over just about any computer I can think of, the exception may be someone with a dedicated high end audio card. The amp has plenty of power to drive even much higher end headphones as well. I am sure there are plenty of people out there with very nice headphones that are not getting the most out of them. However with a small investment you can enjoy your existing headphones even more. I have another headphone amp that I bought some time back when I was looking into cheap tube amps, the NobSound Tube Headphone amp. It retails around 50-60 U.S. dollars. I would say skip that and go directly for the Zen Dac/Amp. It sounds much better, it looks better, and it offers much more power. If you are interested in an Inexpensive option for your office or home, I would recommend checking out the iFi Zen Dac. It will breath new life into your headphones and offer a better listening experience over plugging your awesome headphones directly into your computer.

We are also going to play with using this with the Marantz as the input source between the Mac and It and will post a little update later on.

iFi Provided Hifi Chicken with the Zen Dac. iFi did not pay in part or full for a review of this or any other product.

For more information about iFi head to the following link: https://ifi-audio.com/