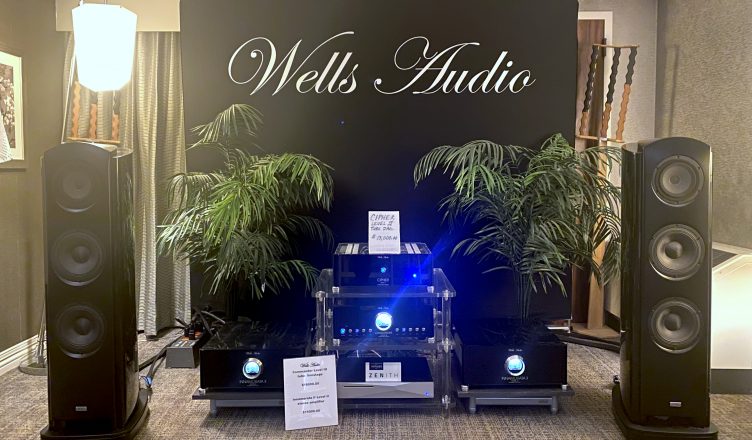 Wells Audio, named for its creator, Jeff Wells, is a rather young company in the world of high-end audio. I met Jeff at Capital Audiofest this year and was instantly interested in knowing more. The Wells Audio room was one of the more intriguing rooms at the show, there was a top-tier sound coming from equipment designed and built by a couple of people. Wells Audio does not have a factory and a team of people designing and building components, it’s Jeff and a couple of others helping. The upside to this is every piece is built and checked over by Jeff, giving you uncompromised quality control, the downside, if you consider it that, is very limited production numbers. Joins us as we look into what makes this boutique American manufacturer what it is.

The birth of an Audio Company

Jeff, like many of us, got started into HiFi at a young age with an inexpensive setup purchased from Best Products. From there Jeff noticed he enjoyed music more and more the better it sounded as he upgraded his system. I would imagine this is likely a familiar story for a lot of audiophiles. For many of us, though this is the end of the story, we found out we had a passion for music and just continued to chase perfection in the reproduction of sound. For a few select others though this is only the beginning of the story.

In his 40’s Jeff was in the Realestate and Finance game. At the time he and his friend wanted to start an Audio business, called Audible Arts. They opened up a retail store doing showings at Jeff’s home. Jeff has always had a talent that lent itself to this line of work, he was and is still great at creating extremely cohesive and complimentary audio systems. There are certain comments that simply play better together than others, and while some of these pairings are well known many are not and can take years if not decades of auditioning components. Jeff could do this for you, he had an ear for it, saving you the customer a lot of time and money. Though after about a year Jeff bought out his partner, the business went on strong enough to warrant getting dedicated retail space to continue sales from.

2008 hit and devastated the Real Estate market, Jeff left behind that chapter of his life and dedicated himself full time to the audio business. It was also around this time when a customer came into the shop with an amplifier that was made by a local outfit and Jeff had a listen and was instantly intrigued by the tonality, fullness, midbass, and harmonics. This was a turning point as this amp still had room for improvement and Jeff knew he could make the improvements.

Jeff purchased the parts directly from the manufacturer and started working on his own amp. Thus around 2010, the first Innamorata was born, and along with it Wells Audio. Though it would not be for a couple more years that the company would really start to take off and sales would start. The experiment began, see if he could build it, then find out if he could sell it, and finally, could he do it repeatedly.

Jeff created his amp and subsequent products out of a passion for creating the best possible sound. Something while extremely difficult is actually easier when you are on your own. Jeff doesn’t have to build something with the constraints of the accounting team, the marketing team, the assembly plant teams, and so on. He answers only to himself, meaning he doesn’t have to explain to anyone else why he purchased the best available electrical components to build his circuits. This is not the case for large corporate companies that have to answer for every penny spent on design.

Jeff is not a formally trained electrical engineer so helping design the circuitry that gives Jeff the sound he wants is Scott Franklin. Once the circuit is designed the PCBs are made and Jeff begins the construction of the circuit using a though hole design on all the boards. Jeff does all the chassis design and building as well as voicing all of the components that come from Wells Audio. There are a couple of people more on the team that helps with testing, and building as needed but ultimately everything is finished and tested by Jeff for unparalleled quality control. Most companies will do a sample of the products they send out for QA/QC and depending on the size of the operation that could be 1 out 10 or 1 out every 10,000 units to leave the assembly plant.

Having an engineering background myself and taking classes on manufacturing economics I can tell you this method is not cheap. Many companies cust massive costs by limiting QC, and while this can work out just fine for simple and cheap products, it also happens at the higher levels too. Hand building things with top-tier parts in America is also not the cheapest way to go about making a product. All that said talking to Jeff revealed that at the heart of Wells Audio is a passion for the best product. Cost and convenience of manufacturing are not part of the ethos here, Jeff is not in this to get rich or become a giant factory pumping out thousands of okay or mediocre products.

Speaking of cost and money, if Jeff is taking the slower and more precise approach then Wells Audio products are probably out of reach for most right? Not at all, once again this wasn’t a get-rich-quick scheme. Well’s audio products are priced well below their competition. Let’s look at the Innamorata II, a 150WPC (8ohm) Stereo power amplifier that sounds absolutely stunning. Often crystal clear detail comes at the cost of a loss of the soul of your music. Jeff describes his sound as neutral with a touch of warmth to keep the richness of the music. I would agree with Jeff on the sound. When I listened to the Innamorata II at the CAF show through the TAD speakers the music was especially rich and full. So what will that run you? The Innamorata II comes in at $7000.00 USD. You can spend a lot more than that for a 2 channel power amp that won’t sound as good.

What of the Future for Wells Audio

I asked Jeff what he thinks the future may hold for Wells Audio. While things are up in the air and depend on how things go there are some certainties. The first one is that Jeff has no intention to sell off Wells Audio. Many smaller companies get offers to be purchased by the big umbrella companies once they start cutting to deep into the market cut of their house brands. Luckily for Wells Audio Fans of the present, past, and future, there is no risk of this happening. Of course, I was also curious about what products we might be able to expect in the future and one thing is sure, we will not be seeing any Loudspeakers from Jeff. Basically, it would require an additional building full of tooling, additional time in design and testing and Jeff doesn’t have the interest in going this route. One of the reasons I was wondering about this is the recent release of a loudspeaker from PS audio, which to be honest I didn’t see coming at all.

Wells will continue to perfect the electronics they make and offer the best sound for the money that they can for as long as Jeff can do so. The long-term goal for Jeff is to be remembered among the greatest audio manufactures of time. I think really the only standing in his way right now is just getting his product in more people’s hands. His room at CAF was in my top 5 of the whole show. I highly recommend checking out show schedules and visiting the Wells Audio room at your local show. Jeff plans to attend AXPONA in 2022 if it happens this year so be sure to stop by and tell Jeff hi, and check out what might be your next upgrade or two.

For more information on checking out Wells Audio Products and Purchasing click the link below.