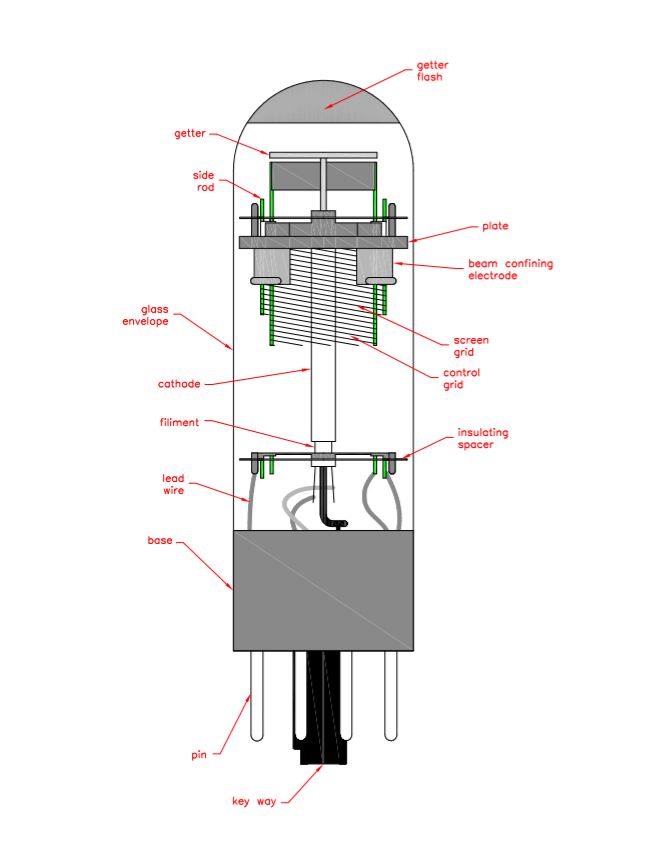 Vacuum tubes have been a staple in audio for nearly a century. You may know what they are and what they do, but how do vacuum tubes work, and what do they actually do. In almost all cases they are used to amplify a signal, or at least in audio equipment. There are many types of tubes and the simplest is a diode. You have likely heard of modern diodes which are used in circuits to control the direction electricity flows. The name diode comes from di meaning 2 and that is has only 2 electrodes inside. There triodes, tetrode, pentodes, and so on.

What are vacuum tubes exactly?

In basic terms they are glass tube with a cathode and anode that pass electrons from one side to the other. However vacuum tubes are a little more complex than that. Below is a diagram outlining the parts of a common vacuum tube. Not all tubes are constructed exactly the same however most tubes in audio applications will be similar.

The path of electricity through the tube will help you understand what it is doing to the current. There are a couple of current paths in the tube, you have the heating element’s current. The Signal that is being amplified and the grid voltage when applicable. The grid voltage is variable from negative to positive. This voltage will control the speed at which electrons move from the cathode to the plate, when positive, they move faster, and negative grid voltage has the opposite effect. The Heating element is constant voltage which is specific to the tube being used in the circuit. The heater is what gives the free electrons the energy to be released from the cathode and flow then to the plate. This is why you want to let your tubes warm up a bit before actual use. How long they take to warm up depends on the tube itself.

The signal is the part we really all care about when it comes to music. Your signal is the music itself being fed into the pre or power amp and out to your speakers. In a solid state amp the transistors amplifier your signal digitally. In a tube amp the Tubes job is to take a weak signal and amplify it. How does the signal get more power floating through a tube though? Well it actually doesn’t. The tube acts a valve that controls how much power the Transformer can output. The closer the grid voltage is to 0 the closer it is basically being a 0 ohm resister meaning that the transformers can flow as much as possible to the output. As you get positive in the grid you get into a distorted signal as the grid will try to pull the electrons to itself and essentially becomes a negative ohm resister which you do not want. A negative resistance is when the current and voltage are inversely proportional.

The path of the signal comes into the circuit and controls the grid voltage. The plate then collects the electrons that the grid voltage allows through and then flows out the signal out. The tube is acting as one side of a load resister. A constant resister is placed on the other side. The higher you turn your volume know the lower and lower resistance you have on the signal side of the path. The Transformer passes more voltage along the signal and out of the output.

Now that you have a better understanding of how vacuum tubes work, you can decide if they are what you want and if they are better for you. On one hand they do not have a hard clipping point like solid state amplifiers. On the other hand they do not have a perfect signal path and wear out quicker. Just a like a light bulb, a vacuum tube has a filament that eventually burns out. Vacuum tubes are often preferred by audiophiles as they have a rather smooth distortion curve, so it is less noticeable to the human ear. All amplification distorts signal, so the preference method is to amplify it with the least distortion, or with desirable distortion. Tubes also allow a user to customize that distortion to their own liking by tube rolling, a hobby in its own right. Tube rolling is where hobbyist will try all sorts of different tubes that are compatible with their equipment. Each tube has a different effect on the tonality of the music signal, some may make huge changes while others may have no noticeable effect. Solid state is generally more reliable and will have little effect on the tonality in a quality amplifier, this is often desirable in a reference style environment. That is not to say it has no effect, but generally speaking less than that of a tube amp. That warm sound you hear people talk about is the tonal change that the tubes distortion adds to the signal, some listeners love it, other not so much.

As always, go and listen to as many amps as you can before spending your hard earned cash.

Get started with vacuum tubes

Are you just getting started in tubes and looking for an inexpensive way to explore this world? Check out our review on one of the least expensive stereo tube amps out there.
Cheap Tube Amps

One thought on “How Vacuum Tubes Work”